How it Helps Heal Wounds 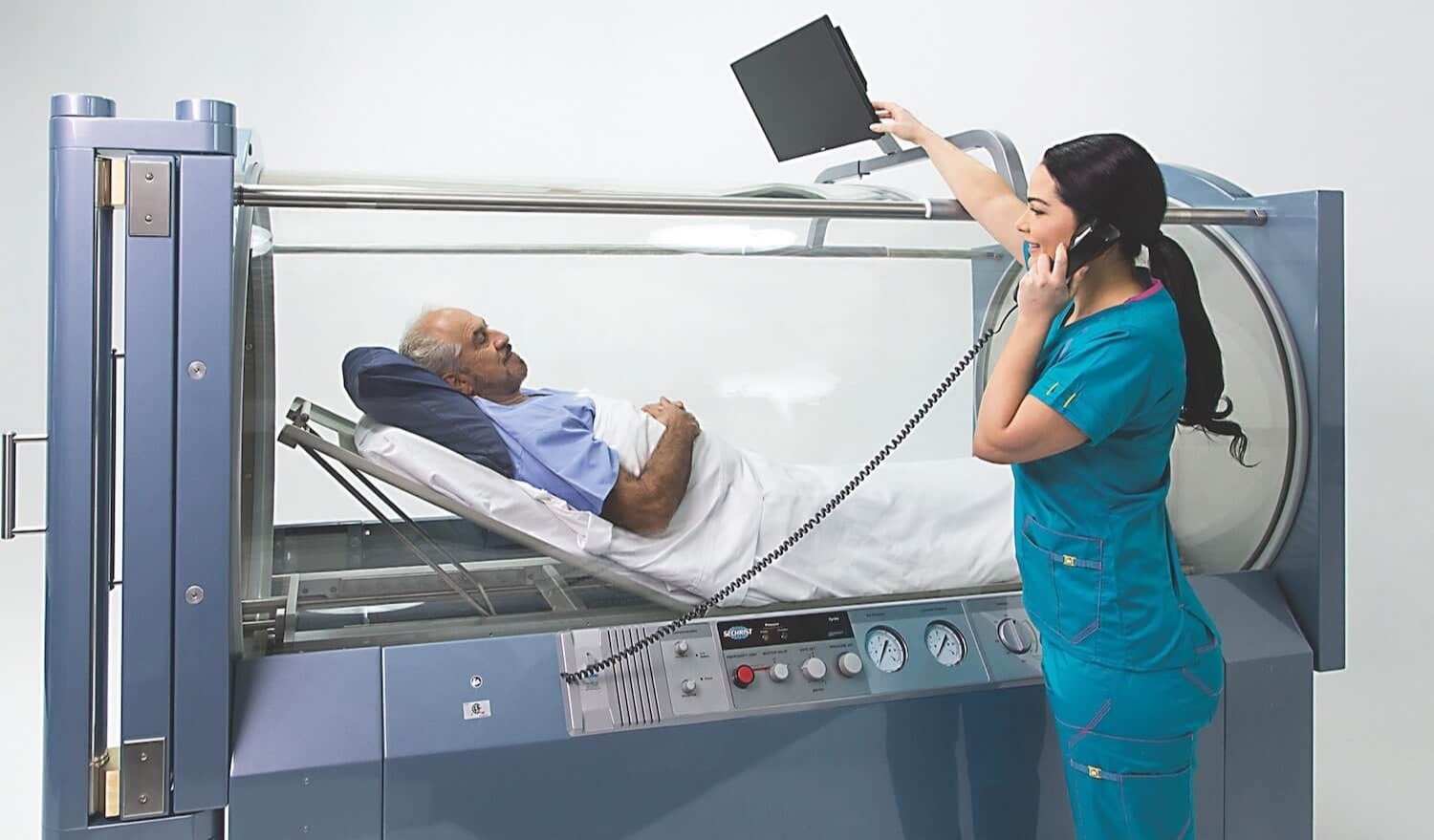 What is Hyperbaric Oxygen Therapy and How it Helps Heal Wounds

Hyperbaric oxygen (HBO) therapy involves treating patients with 100% oxygen (O2) at elevated atmospheric pressures in a specially designed chamber. The chambers are about 3 feet in diameter and 8 feet long, so they are big enough for people to enter and exit easily. Most patients lie on their backs or sit up just slightly. During the treatment they can watch TV, take a nap, read a book or listen to music to keep themselves entertained during the treatment, which can last up to two hours.

During the treatment, the chamber is filled with 100% pure oxygen and the atmospheric pressure is increased to up to three times higher than normal. Transparent walls allow the clinical staff to monitor the patient closely and minimize discomfort for those with claustrophobia. Some chambers are the size of small rooms that can treat multiple people at the same time. There is always a trained professional monitoring the oxygen levels and observing patients throughout the treatment cycle.

The benefit of increased pressure includes improved oxygenation to damaged tissues by increasing the amount of O2 in the blood plasma which can reduce inflammation and swelling by improving circulation. Increased oxygen levels also help the body build up white blood cells which help fight off infection. HBO therapy has been shown useful in limb preservation by improving oxygen flow to complex diabetic foot and ischemic limb ulcers as well as osteomyelitis, and necrotizing fasciitis.

Increased oxygen supply can also help individuals suffering from air embolism, decompression sickness, burns, cerebral edema, diabetic wounds, gas gangrene, stroke, and many others. With a rise in oxygen rich blood cells, affected tissues throughout the body are able to stimulate a process called angiogenesis. Angiogenesis is the formation of new blood vessels. This developmental process involves the growth and maturation of endothelial cells, which are the main type of cell located inside blood vessels, lymph nodes, and the heart.

Most sessions in the chamber are 90 minutes, several times a week, for several weeks. Typical treatment protocols for leg ulcers involve one or two treatments daily for a total of 20 to 40 treatments. Risks though rare, can be serious, including seizures, collapsed lung, and ear pain due to the increased air pressure. HBO is covered by most insurance plans and is considered a cost-effective tool to treat limbs that may otherwise be destined for amputation. However, access to hyperbaric chambers may be limited in some areas and involves a time commitment for patients and their families.

Wound care centers are increasing in popularity and offer coordinated multispecialty management of complex wound problems. Due to the size of hyperbaric oxygen chambers, most physician’s do not have them in their offices, though the chambers are used by a variety of specialists including vascular, plastic, general and orthopedic surgeons. Proper coordination of care is essential for the evaluation and treatment plan of wound care patients.